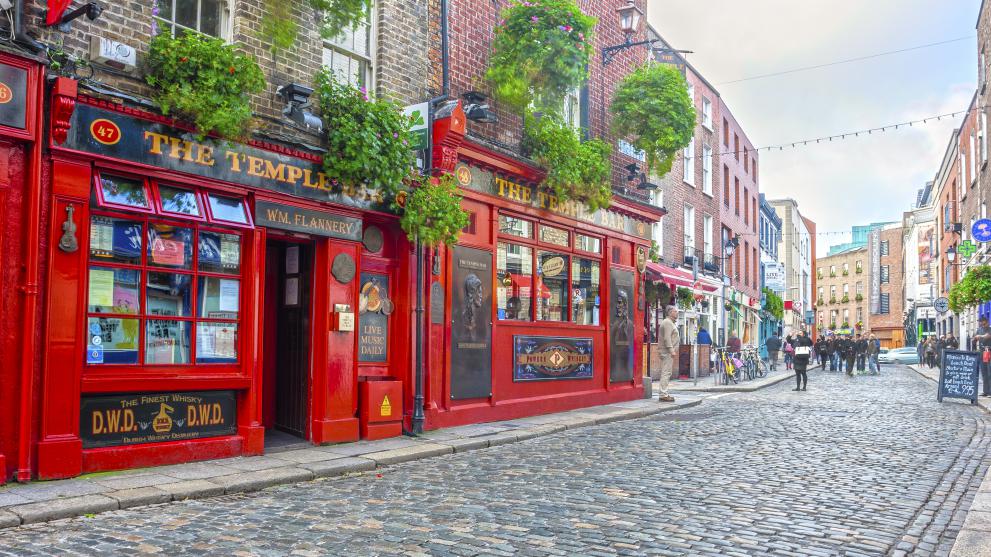 The capital of Ireland has managed to attract some of the world’s biggest brands, including Amazon, Twitter, LinkedIn, Facebook, Pfizer, Johnson & Johnson, and many others. Setting up offices and regional headquarters in Dublin has benefitted hundreds of foreign firms. Here is a look at what makes Dublin so appealing to so many big businesses.

The Irish government has actively sought to attract foreign companies. Ireland has some of the lowest corporate tax rates in all of Europe. According to IDA Ireland the country’s corporate tax rate stood at 12.5% in 2019. This compares very favorably against Germany (30%), Italy (24%), Estonia (20%), and UK (19%). Over a thousand foreign companies have chosen Dublin as their European base. Low taxes are not the only attraction. Ireland ranks 5 among 31 European countries on the ease of doing business. Ireland’s GDP per capita is the third highest worldwide. Positive GDP growth and low unemployment in recent years made Ireland one of the healthiest economies in Europe.

Ireland has a vast migrant population. The Central Statistics Office (CSO) of Ireland reported in April 2020 that 644,400 non-Irish citizens were dwelling in the country. They comprised 12.9% of Ireland’s population. The largest migrant communities in Ireland are from Poland (122,515), UK (103,113), Lithuania (36,552), Romania (29,186), Latvia (19,933), Brazil (13,640), Spain (12,112), Italy (11,732), France (11,661), and Germany (11,531). Dublin’s multicultural and multilingual characteristic makes it easier to find suitable resources for just about any kind of business activity. A January 2020 study by global recruitment firm Adecco ranked Dublin among the top locations worldwide for attracting, retaining, nurturing, and educating skilled workers. Ireland is a lively society and one of the most open economies in the world. Migrants in Ireland regularly send remittances via the Ria Money Transfer App and other channels to support their families in their home countries.

Ireland is home to some exceptional universities which enjoy high global rankings. The National University of Ireland, Galway (NUIG), ranks third in Ireland and 238 globally. NUIG scores high on faculty to student ratio. It offers a wide variety of undergraduate and postgraduate courses and part-time degrees, flexible learning, and online learning options. University College Dublin (UCD) ranks 177 globally. It has 30,000 students from over 136 countries. Trinity College Dublin (TCD) takes the best university in Ireland, ranked 101 in the World University Rankings 2021.

Ireland offers comparatively affordable education for both Irish and international students. According to the masters portal, students in Ireland pay tuition fees to the tune of EUR 3,000–30,000 per academic year. This is less expensive compared to the UK and some other EU countries. The Irish Times stated in 2020 that Ireland’s global reputation for an exceptional education is built on a solid foundation of commitment to excellence. Ireland welcomes students from all over the world.

Ireland placed second out of 189 countries on the UN annual HDI ranking 2020. The Human Development Index (HDI) considers education, longevity, and income, among other factors. Ireland’s human development is ahead of major economies such as Germany, Sweden, Australia, and the UK. Ireland has steadily improved its HDI rank since the index was created in the 1990s.

In 2018 Ireland as a whole was reported to have one of the best logistics infrastructures in Europe. This is a vital consideration for many foreign firms planning to relocate here. Logistics and transportation systems in Ireland are also comparatively less expensive than in the UK and Germany. Since Brexit, Ireland also enjoys unique proximity and preferential bilateral relations with the UK. This makes it a choice destination for many EU firms.

Hemant G is a contributing writer at Sparkwebs LLC, a Digital and Content Marketing Agency. When he’s not writing, he loves to travel, scuba dive, and watch documentaries.